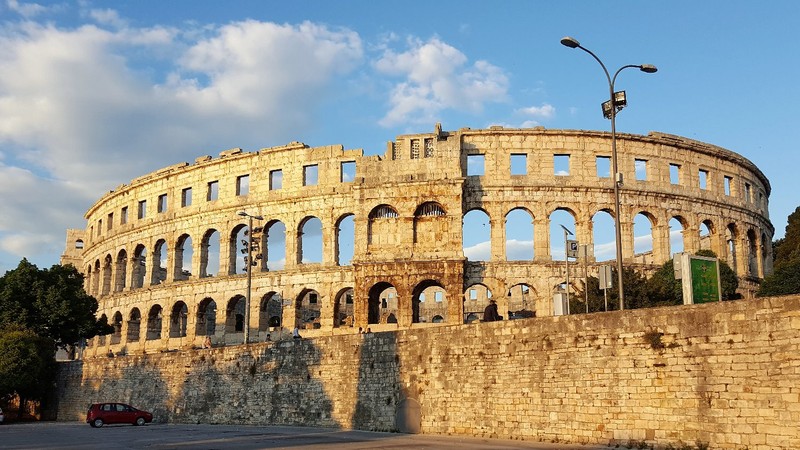 As much as we enjoyed Piran, it was now time for the next part of our trip. Initially we had planned to stay in Slovenia and booked our last hotel in Novo Mesto. But the weather forecast for Istria was much better than for inland Slovenia, so we changed our plans last minute and managed to book a room at a guesthouse in Vinkuran, a small town at the south tip of the Istrian peninsula, which is part of Croatia. We really couldn't have made a better decision.

We passed another nice town still in the Slovenian part of Istria, Portoroz, and then soon arrived at the border crossing. The Croatian officers were not interested in checking passports, so crossing he border was really a breeze. The sun was out, it was getting well above 20 degrees Celsius. There is a motorway straight to Pula, but we decided that we would like to follow the coast a little more. However, due to some river deltas and estuaries, this is only partly possible. Nonetheless we took a smaller road down.

We made short stops at Umag and Porec to buy some snacks and drinks for on the way, and followed road #75. While the attempts to follow the coast did not really work out as we wished, this was more than compensated by the forests and rolling hills more inland. It was not spectacular but just pretty for most of the route.

For lunch we stopped at Restoran Istarska hiža Kontija, along the road in Sveti Lovreč, just over half way of our route today. The reason why we stopped there was because it was already almost 2 o'clock in the afternoon and we were getting hungry, and this place seemed to be popular, considering the almost full terrace, and the number of cars, motorbikes and bicycles parked there. The moment that we drove onto the parking lot we knew that this was a good pick. Under a pergola, two chefs were cutting chunks of meat of a freshly roasted suckling pig, and on the other side of the terrace, another one was roasting above the wood fire. The atmosphere was clearly cheerful, it seemed that everyone was thoroughly enjoying the first real summer day of the season. 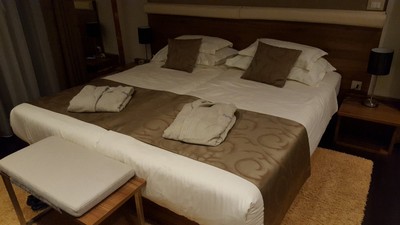 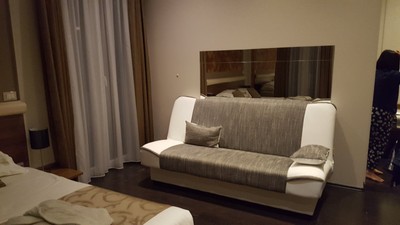 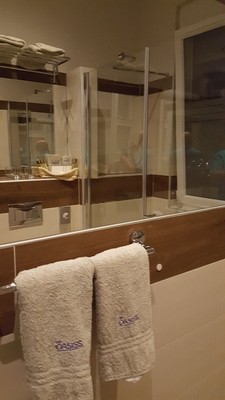 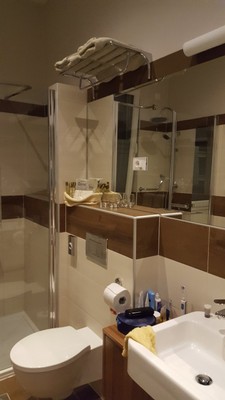 In the end of the afternoon we reached Vinkuran, a small village just outside of Pula. We found the hotel, which actually looked more like a large modern private house, turned into a Bed & Breakfast. We were welcomed with a welcome drink, and checked in. We understood that for this night we would be the only guests. Even though this was a small place we very much loved it. The room was impeccable, and upstairs there was a terrace with a pool. Perfect!

Then the owner offered to drive us around the area in his own car so that we got a bit more familiar with the immediate surroundings and with the city of Pula. We found this a very nice offer which we gladly accepted. We drove through the city and the owner told us a lot of facts from the pre-roman history, via the Romans, the Middle Ages, the Venetians, Austrians and Napoleontic France, till the present. There are many historical buildings. 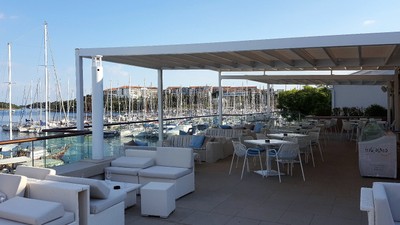 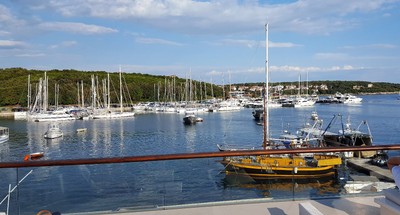 After half an hour or so we were on the way back, when we passed a nice restaurant with terrace at a marina, so we asked the owner if he would accept a cool drink from us before getting back.

In the evening, we decided to have dinner in the old town of Pula. We parked the car next to the Roman Arena, and walked into he pedestrians-only street into the old town. Although the center is beautiful with lots of history and excavations and a tower, it somehow missed the charm of Piran. Perhaps it was because it was so quiet, or because of the local people. 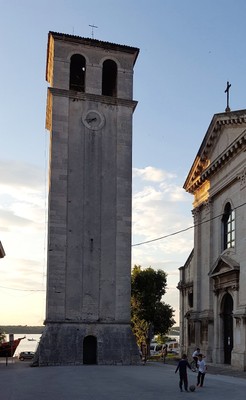 In general, we felt like the Croatians were a little less open and hospitable than the Slovenians. On the other hand, once we were seated at a very simple place for an even simpler local dish of fried anchovies with fries and salad, the conversation with the locals started off after a glass of wine or two, and we had a very nice evening after all. 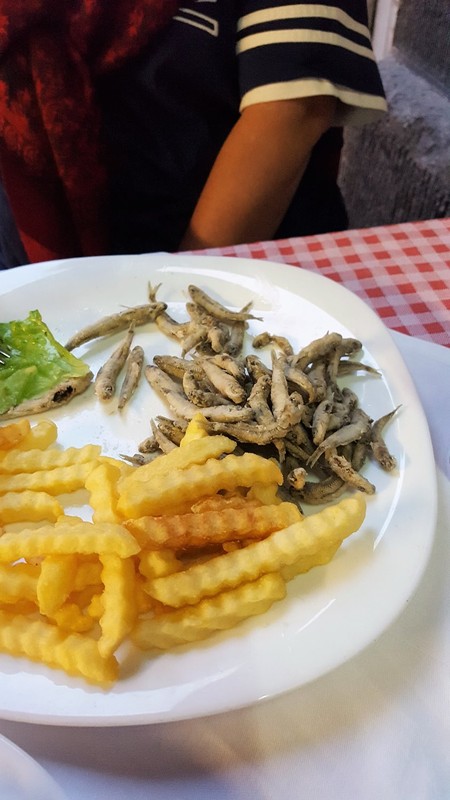 When we went back to the car, the Amphitheatre was beautifully illuminated. This is really a landmark. It was built between 27 B.C and 68 A.D. so the construction took almost 100 years. What makes it very special is the size, and above all the fact that most of the original structure still stands today as it had been built. 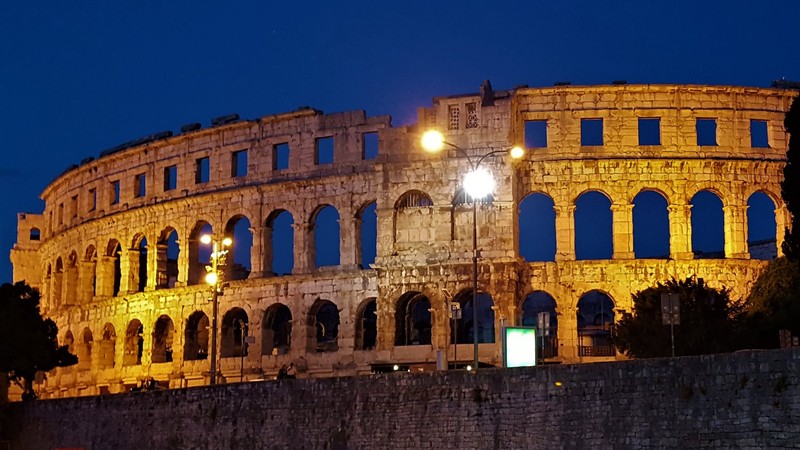 The next day was a lazy day, which can be summed up quite simply as follows:

Morning walk along the little bay of Vinkuran, under the morning sun, and discovering the place where we would have dinner that night. 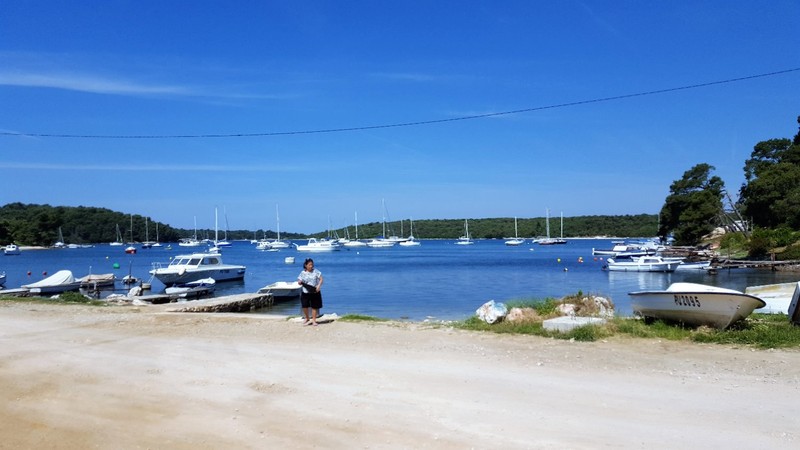 Drive to the village of Premantura for some shoppings, especially a cap for me, and flip flops for both of us, which we had forgotten to bring. Plus a cup of very good espresso.

Seafood lunch at Restaurant Kamik in Banjole, which was another lucky shot. Actually a double lucky shot, because we later found out that the reviews about this place were quite mixed, from raving to trashing. Whatever is the case, we very much enjoyed our lunch at the outside terrace there. We had a little issue regarding the invoice which was resolved quickly and graciously, and the food as well as the cold local wine were very nice. 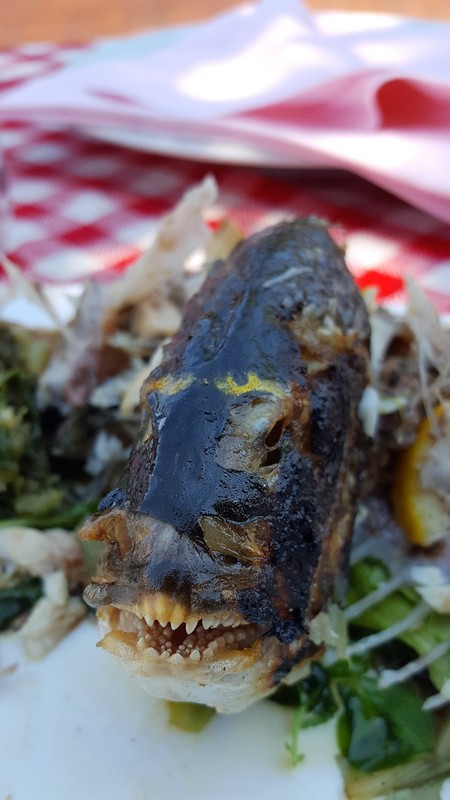 People talk a lot about plating and how attractive a plate can be made. Our fish looked a little aggressive at us from the dish, with piranha type of teeth, but it was really good. We also had entertainment. During our entire lunch time, a small lizard on the wall was playing hide and seek with us. Hopefully after we left he still found some crumbs or morsels on our table, but it couldn't be much because we almost ate everything... 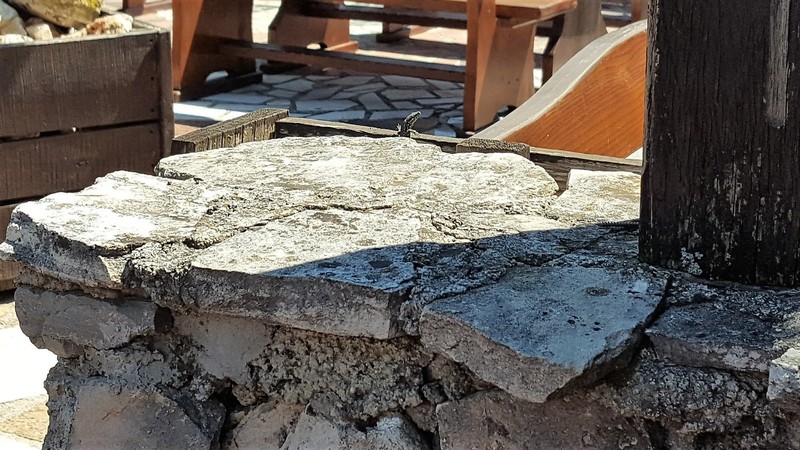 A whole afternoon at Medulin Beach, warm enough to get into the shallow bay. You have to walk quite a bit out to get to deeper water, but it is clean, clear and pleasant. Maybe because it was not the season yet, but it had the feel as a seaside resort mostly for local people. 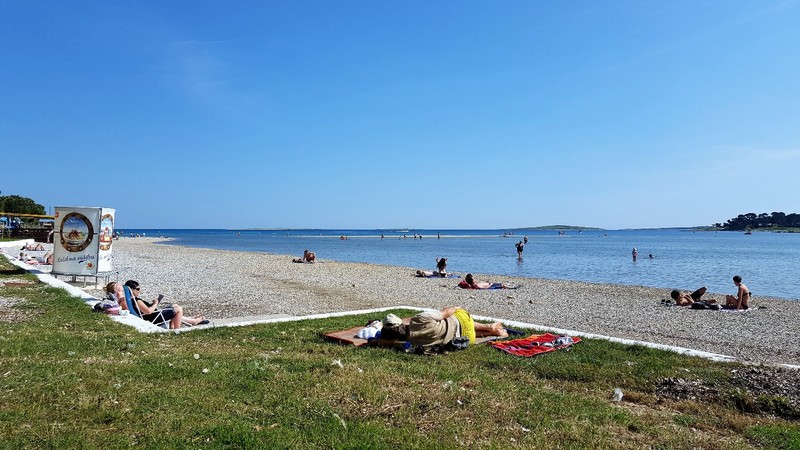 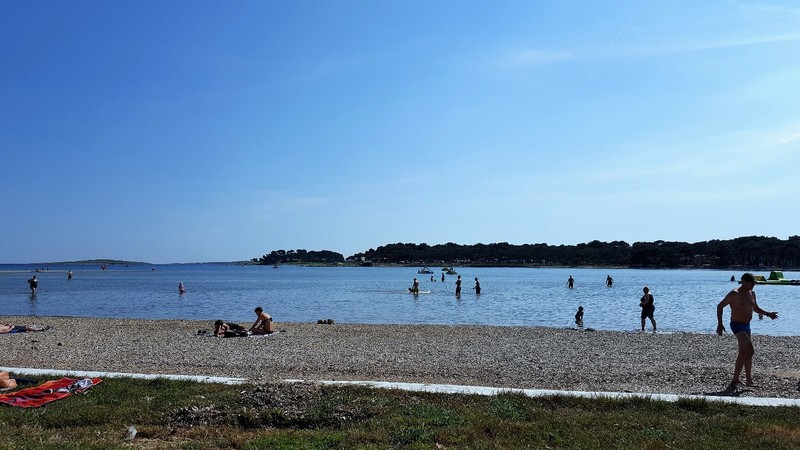 Our al-fresco dinner was at walking distance of our hotel, at Restaurant Barka in Banjole. Very nice food and because we didn't have to drive we could both enjoy the wine as well. A little bit more upscale than other restaurants, this place, and it was our last night before flying back, so we didn't mind at all to eat a little more lavish this time. Food was great (a selection of grilled meats and local sausage specialties), service was very friendly, and when we received the bill we were still pleasantly surprised.